Injectors on driver side were taken apart and cleaned a couple years ago. And was working well. Figured while I had it drained of coolant I’d take the passenger side out and clean them to see if it would remedy a slight haze at idle and little smelly exhaust.

took the injectors apart put them in my ultrasonic cleaner. Reassembled. And chug chug chug.

Managed to sneak a balance rate check in right when the truck started. And injector 6 was up at 15. So I replaced that injector suspecting that was the problem.

put it back together and it still chugs once it warms up, but smokes from start up.

i can check the balance rate in drive. I put the brand new fuel injector into cylinder 4. Cylinder 8 has a 2 year old injector in it as well.

the truck in neutral chugs like it has a lope tune and smokes white blue. But when I put it in drive the lope mostly stops but continues to smoke. And I can read balance rates again.

truck can still run and drive. But I had only a little haze at idle and slight stinky diesel exhaust before this.

I have cleaned multiple trucks injectors before and never had an issue.

Main injection rate at idle is bouncing from 0.0mm3 to 3.1mm3

Is there something I could have done regardless of injector issues that could’ve caused this? Electrical or anything?

That's the classic bad injector symptoms. The main rate being so low indicates one or more injectors are leaking constantly, which would cause the smoke and lope. I can't think of any electrical problem that would cause this behavior. 99% it's injectors.

yup, the 0.0mm3 means injectors are shutting off and then the computer is turning them back on again to give the 3.1mm3. this is the lope and means you have injectors that are returning way too much or leaking into multiple cylinders way too much and the computer can not reduce the fueling enough.

I'm with Dave and James on this one, all signs point toward bad injectors. I will say, doing just a single injector on an LB7 IMO is a bad idea from a time-to-return standpoint. You've got to do all but remove the other 3 injectors just to change one injector meaning the time difference is so small it hurts to change them all on at least that bank.

There have been major advancements in the last 2-5 years on LB7 injectors that greatly extend their life. The major issue that the VCO is plagued by is simply wearing out and not sealing the holes in the nozzle properly which cleaning them won't help at all.
I

Had the injectors out again, here’s all the needles in the nozzles. Third one is a piece of lint from the cloth, not a scratch or mark.

I’ve never taken apart a new injector so I’m not quite sure exactly what the needles are suppose to look like. If they’re suppose to have two rings around the tip, or if that’s wear.

Also, the reason I was thinking something electrical might be the case is because the last picture. No idea why my high beams are on dim, and he passenger low beam is dim. Seeing if it was a chain reaction.

Tomorrow I’ll order the 4 for that side and be done with it. The truck has nearly 500,000 so I’m not trying to dump money into it if I don’t have to, hence why I only did one injector on the driver side.

I have an LBZ that I always have, this truck I’m working on is more so my work truck. Doesn’t have to be perfect.

Here is a thread on another site where I took a number of close up photos of the insides of an LB7 injector. You can compare yours to mine there 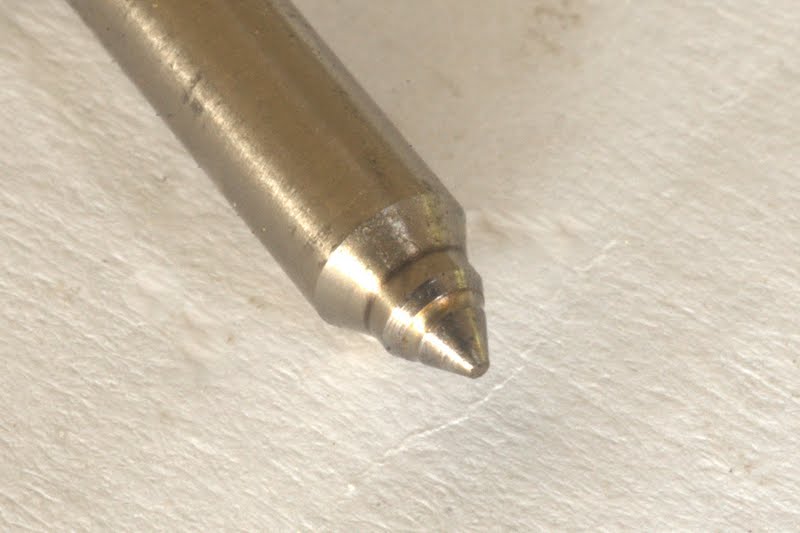 Injector nozzles on 1/3/7 all are coated heavily in soot. While injector 5 is still actually fairly clean.

Going in with my EFI Live I was able to turn off injector 1 and it smoothed out there idle a lot and kind of ran like a half normal truck, but still had quite the smoke show. Turning either 3 or 7 off made the truck run worse. While turning injector 5 off made almost no change.

I’m doing this to hopefully help anyone going through a similar situation. Cleaning may work if you have have an otherwise healthy injector, and catastrophically one has taken a turn for the worst incidentally. Which I have done an LLY injector that did have that issue, and it did save the injector as it wasn’t ran for long. And i did knock down the balance rates by more then half when I originally did the drivers side on the 2 injectors that weren’t new.

Got the new injectors. Took one apart to see the part number on the new nozzles to see if they were different with updated number. Also, the needle slides extremely free in the nozzle itself. No catching on anything, freely slid down and slid out of the nozzle. My old needles and nozzles had a slight hesitation.

Here’s the tip of the needle. Brand new never ran. For anyone to reference if they are wanting to compare theirs vs a new one.

Also, I noticed a few points of concern on 3 out of the 4 injectors. One had a chipped seat of the feed port. And two had metal shavings/burrs that we’re ready to fall off and go into the engine. I forget the brand they were but I will get the paper. Buyer beware. Inspect your injectors before you take them home.

Then, once I got the truck started, the passenger side idled very nicely, but it definitely showed me how bad the two injectors that weren’t replaced were. So, while it is in the shop I pulled the other two injectors. And ordered two new ones.

You can compare the balance rates from this picture to my previous picture and see the difference in the fuel that has to be pulled.

Forgot to update, put two more injectors in it. No more smoke, idle off the start had a haze still. Haven