You are using an out of date browser. It may not display this or other websites correctly.
You should upgrade or use an alternative browser.

Figured id make a little more detailed post and thread on the worked that happened on Friday.

Headed out to Mikes/Evans shop on Thursday night to install the Ratiotek valve body kit Mike and Steve came up with over the last few months. If this trans is going to have any chance at holding any kind of power over stock, its gunna take more than just a converter. Ive been seeing and hearing trucks with any kind of power over stock are not holding up once they get some miles on them. Mike nailed that one long ago on that E clutch.

Friday morning, Jon (@fastpunker) and i headed into the shop from the hotel and Mike introduced us to Evan and Dillon. Talked/BS'ed for a bit and then Jon and i went out to do some logging on the stock trans per what mike wanted to see for us to compare after. 20-30 min later, we pull in and throw her on the rack. Up she goes and Roger gets to work quickly pulling the pan off. There is no drain bolt on these pans, strictly just a fill level bolt you pull and let fluid drain out of till it stops to set the level. i think Roger forgot this and attempted to lean the pan forward to get oil to come out, Mike says "i wouldnt do that" and SPLASH, fluid come rushing out right at Mike. he may be an old cat but hes still got moves! he jumped back fast enough that not a drop of fluid touched him

. we get everything dropped out and Sal comes over to pull the valve body. After some instruction interpretation from Ratiotek and looking around, valve body drops out and its off to the bench. 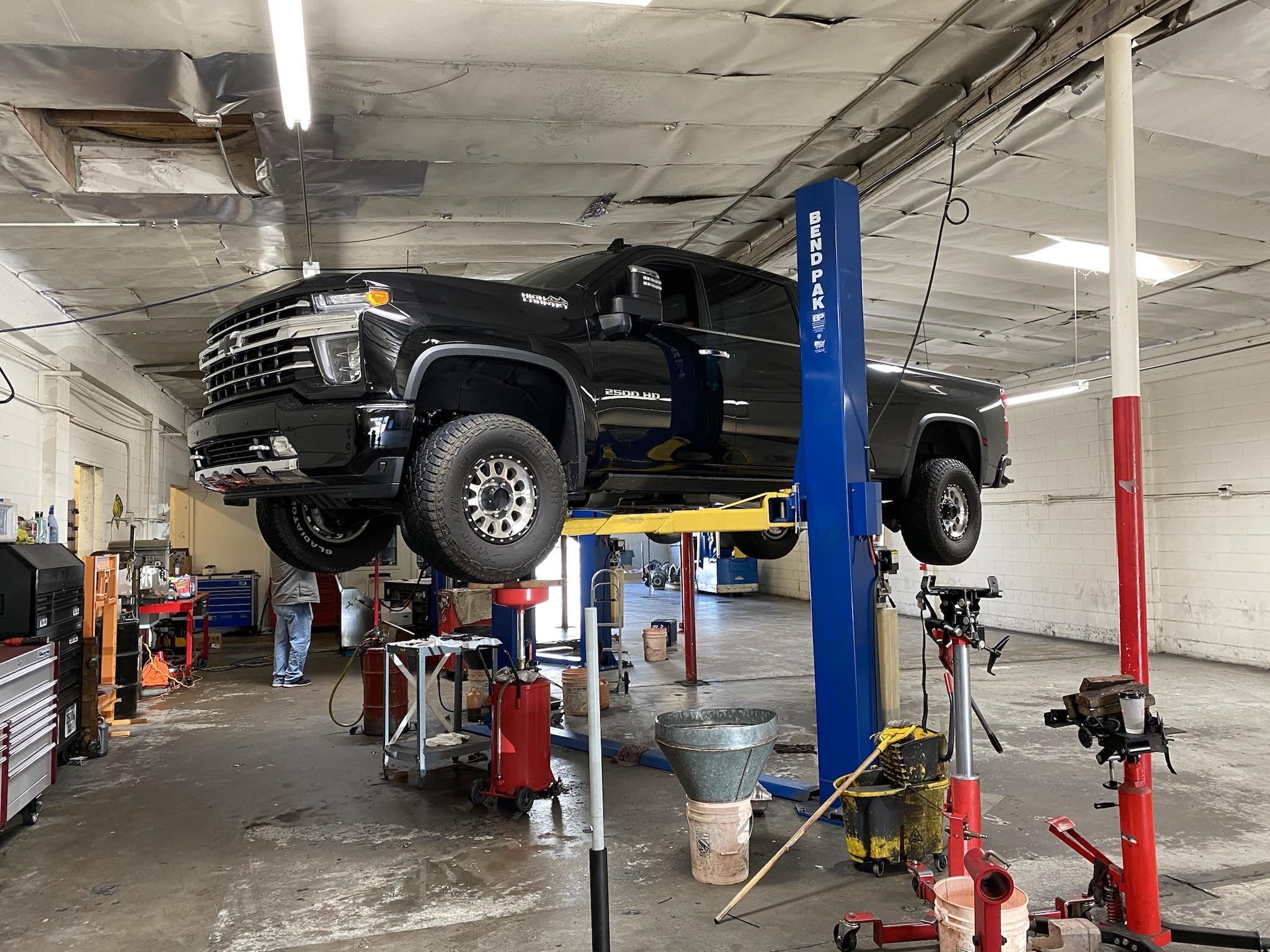 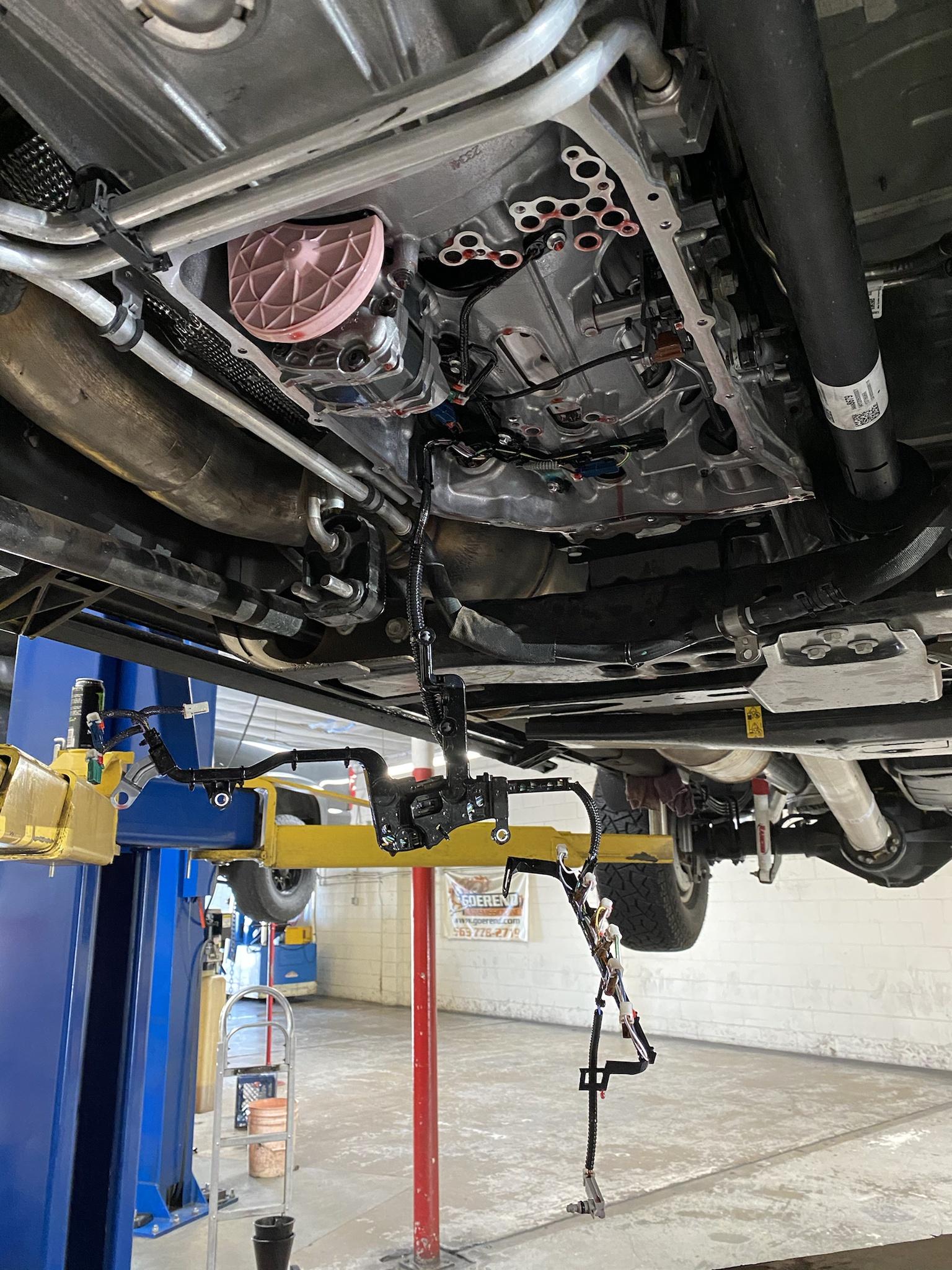 From here, im just hanging back and peaking over the shoulders of the much more knowledgeable to see whats going on. Springs and drilling are on the menu for that valve body. All i will say is, the instructions should be thoroughly read for shops that do this. its easy to skip/miss where a "blue" spring goes

. They got the valve body sorted, made sure all the check balls were in the right spot and back together it went. if you look hard in the pic, you can see the secret holes... 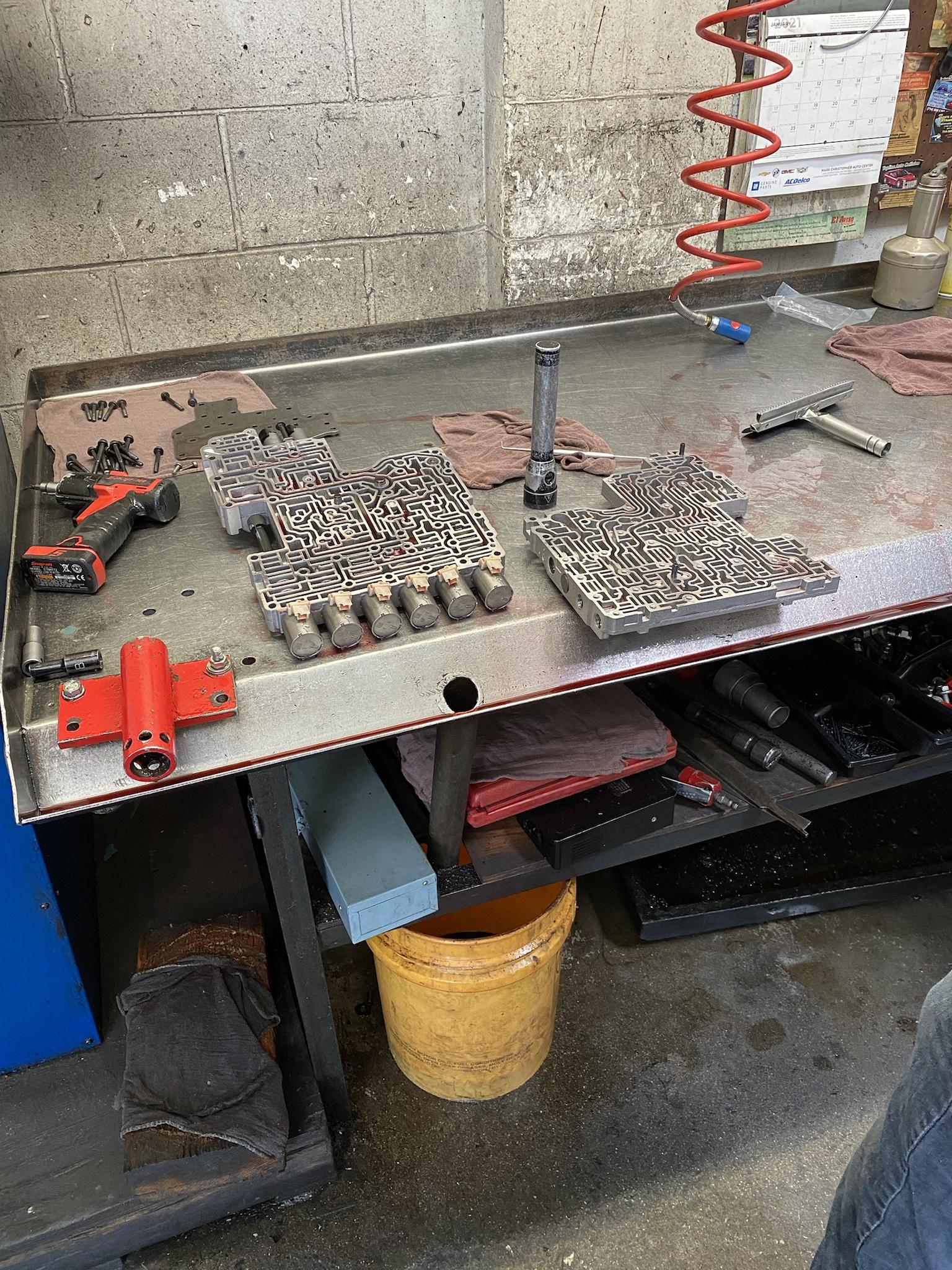 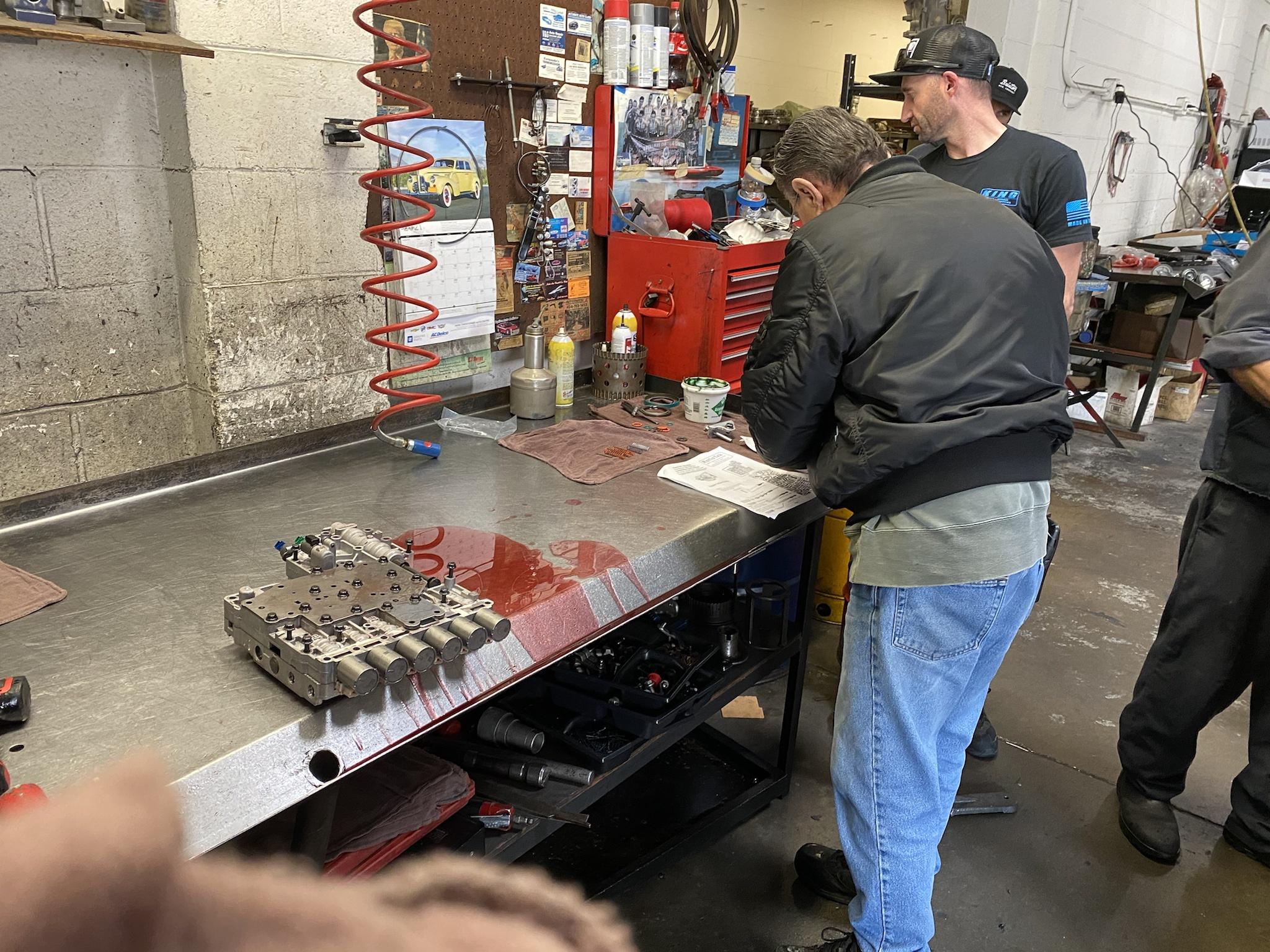 now installing these valve body aint simple. its very easy to get bolts in the wrong spot you think fit correctly but dont. i can already see reg joe's trying to do this in their garage and spending hours trying to figure out how they got extra bolts that dont fit! we had our own fit figuring it out and 45 min later between Evan, Mike, Sal, Jon and i, we got the damn thing. As everything is getting snugged up, Jons wise ass asks me "So this bolt is a medium sized one..." and before he continues, i go "Where the f**k did you get that bolt?!? did you take it out of the damn valve body or is it another damn extra!" everyone stops and stares at him. he goes "no i pulled it out of here just to verify" as he points to the open hole in the valve body. i said "Damn it jon!! dont do that shit! we just spent forever figuring this crap out and you go scarring the hell out of me thinking we got an extra bolt!!". We all bust out laughing at my expense and Jon's genuine curiosity about the bolt size. As Evan said, "hey if we get down to just one extra bolt, she will run just fine. weight reduction"

Pan goes back on, top it off with fluid and Sal crosses his fingers we have no check engine light. Mike hops in and no lights!! did some preliminary testing on the lift to make sure we had gears and then it was off to the streets. It took maybe 4-5 runs through the gears and i swore it felt just like stock which was good! We drove around for a while and varied throttle positions without much to be noted. So we came back, BS'ed for a couple hours and Jon and i packed up to go deal with LA traffic back to phx.

Ill be seeing how it does this week if any "bad habits" are learned in the trans or if it stays shifting like stock. we might have felt 1 or two quarky shifts in LA traffic as we left but nothing worth noting. Thus far, it shifts like stock. By weeks end, ill be relaying info both via pressures and logged data back to the guys for comparison.

Mike will have to elaborate more on the details of the kit but we got progress! per facebook, i basically have a built trans at this point with a converter and VB kit

Just had to come pull the retiree back in for a day and meet Evan finally.

What's in order for it now?

You put a 68POS in that truck, Im hopping the next plane to Phoenix to stop by your house and bitchslap you.

We installed the new valve body kit that Ratio-tek and I worked on. So far so good. James will report on it after break in.

It was nice to finally meet you.

TheBac said:
You put a 68POS in that truck, Im hopping the next plane to Phoenix to stop by your house and bitchslap you.
Click to expand...

I might not be opposed to that just to bring your ass out here!


Mike L. said:
We installed the new valve body kit that Ratio-tek and I worked on. So far so good. James will report on it after break in.
Click to expand...

Do forget those other super secret holes in there

[email protected] said:
It was nice to finally meet you.
Click to expand...

I’ll give you guys a call here by this up coming Friday with an update. So far, can’t tell anything was done. Wide open throttle “seems” like quicker shifts but may just be placebo affect and still learning

May need to call kory and loose the banks

Any update on how this is going? I am slowly modding my 21 but before I do the weightloss want some additional line pressure for the 10 speed. Daily driver and tow around 15k often. Figure this will fit the bill and converter later down the road, hell with just Derringer currently I outrun the stock converter.

It won’t stop you from hurting the trans. Think of it like a transgo jr kit from back in the day. Good for a fresh stock trans, mild 40hp tune and not beating on the truck.

You got decent miles on the trans, beat on it and tune it, it won’t save it

There’s still more that needs to be done to the trans and we need trans tuning that accesses lots of required tables. I personally feel this kit is perfect for the guy that wants a stock trans to last under stock power. Maybe a little bump in power that won’t abuse it.

It sure as hell won’t hurt to put in, just don’t expect it to make miracles happen

Would be easier to just drop a 6 speed into it

gmduramax said:
Would be easier to just drop a 6 speed into it

I'm not seeing any 10L kits on their site unless I'm missing something?

PureHybrid said:
Any more info James? I saw Goerend had two different kits for the 10L listed, one is for "800+HP"
Click to expand...

RatioTek has the same thing for the LML and L5P 6 speed Allison. On those application, he PRX kit comes with an extra spring that raises pressure in the transmission. It's kind of like using a shim in the pressure regulator valve on the older Allison with the spring. Just gives a little extra holding power.
Reactions: PureHybrid

Can't they do that in TCM tuning Josh?

455buick said:
I'm not seeing any 10L kits on their site unless I'm missing something?
Click to expand...

It's not a rebuild, just valve body stuff

PureHybrid said:
Any more info James? I saw Goerend had two different kits for the 10L listed, one is for "800+HP"
Click to expand...

nope, nothing yet. That 800hp kit is just valve body stuff. its not going to be fun in a daily driven truck and its not going to keep a stock trans alive at that hp. its "ahead of its time" right now till tcm tuning and clutches can catch up. TCM tuning will be needed to make that VB kit shift nice.