You are using an out of date browser. It may not display this or other websites correctly.
You should upgrade or use an alternative browser.
M

Hi everyone, Mike here, so I am new here, not normally needing assistance, but this one has me in a loop.

So the problem started out about 8 months ago - wouldn't lock into 5th gear and when mashed on the pedal the passing gear (dropping down to pass) wasn't happening, slow and sluggish .

Following that 1 month later after 30 minutes of driving truck wouldn't come out of 3-4 gear, unless it was neutral or park and reverse.

This Month, now that the weather is tolerable - dropped the pan - no debri (or material)- fluid is a beautiful red - replaced all the solenoids with OEM, but during the investigations under a plate (Trim solenoids) there are 2 springs, 1 was broken into 3 pieces. replaced both of those springs as well as the Psm and the MLPS switch on the outside of the transmission, plus a new wire harness ( found mine was leaking trans fluid during the inspections )

So none of this stuff was replaced by me or anyone else since I had purchased the truck 8 years ago, so I figured now was the time to do it since Im dropping everything down.

Well that fixed nothing.

First it was shift inhibited when I finished up, so
I replaced that electronic lock in the steering column (no change),
checked all the fuses, (they are good),
Fluid is full
Checked the pins on the TCM (seated tight)
relearned Transmission

I reset the main TCM harness and cleaned it up, and the Shift inhibited went away, I was able to drive the truck and it was movin, like I havent felt in awile, had power, nice shifting, everything was great in the 20 minutes I drove it .

Wife jumped in it and drove another 20 minutes and it went out of gear and then locked into 4th.

along with that 22 Errors .

Its sounding like a communication problem ... but I am not sure... I keep thinking the TCM is screwing up judging by the codes she is throwing at me ... but again I am unsure.

Anytime you start it up throw it into reverse - no issue - neutral - no problem put it into Drive and she will sit in 1st gear for 20 seconds then you hear it shift into 4th and lock, just sitting there idling not driving. 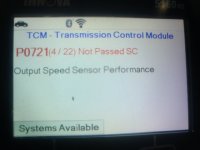 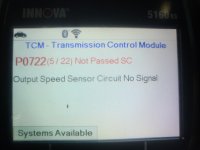 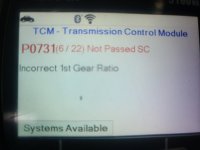 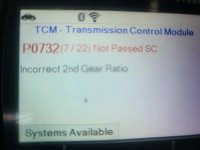 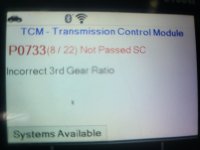 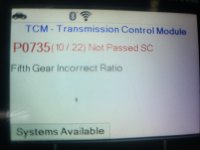 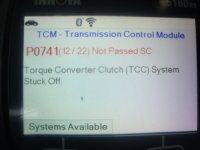 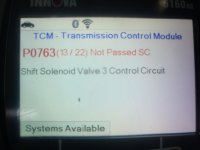 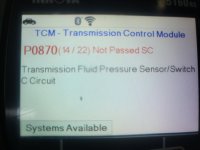 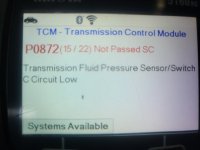 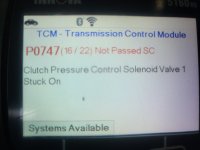 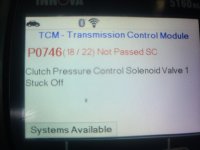 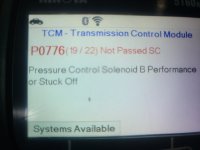 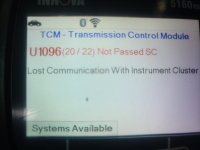 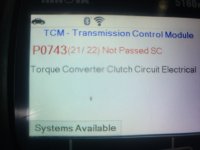 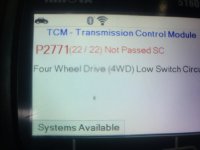 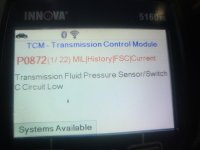 You need a good trans shop. Where you located?
M

Morris, IL .. I trust these trans guys around me (city) like a trust a politician to do right by the people. I think there is 1 performance diesel place by me that I recently found out about, but I am not even sure they are in business anymore.

With the codes that are displayed, and your deep knowledge into this ( I have read a lot of your posts ) what is your gut instict telling you ? just out of curiosity.

The problem is you threw every code in the book.Every gear is slipping, you have speed sensor codes, you have tie up codes ( 2 gears at once.) You have valve body codes. Start with a know good TCM and see what codes come back. Then move on to the valve body.
M

Mike L. said:
The problem is you threw every code in the book.Every gear is slipping, you have speed sensor codes, you have tie up codes ( 2 gears at once.) You have valve body codes. Start with a know good TCM and see what codes come back. Then move on to the valve body.
Click to expand...

I really appreciate your input and being able to see the issue. I will see what I can find on another tcm and go from there, I mean whats the worst that can happen ? replace the trans ? Although the 20 minute drive I did take, that trans didn't shift, sloppy, or hard, or make any noise or clunks, it felt really strong and healthy with its torque.

I will follow up, and see where this leads farther down the rabbit hole and report back, if anyone thinks of anything else to look at or try I am all ears.

I really appreciate it Mike !
M

@Mike L . following up on this conversation,

Well. I made a 16g x 10 wire harness x2 along with a male end running into the transmission, fixed a couple wire ends (replaced the pins to questionable way they seat in the plug), after taking them apart, they were more superficial, BUT still, I fixed them.

I checked continuity of the whole harness. TCM to transmission, to fuse box, to under dash, you name it, I followed it. All ohmed out at.3 to.4 at the highest testing good. So my trouble shooting skills from when I used to be a heavy equip tech kicked in finally, and said "hey lets check the tcm" mind you I sent it out, and got it back, the people claiming they tested it.

So grey connector side, tcm out of the truck, on a flat surface (nothing connected, tcm has been unhooked for a week), I probed 1 pin, and then checked it across to red side, and yea. Over 1 ohm. So I managed to find multiple pins, that crossed over to the red side, and yea, I can see that happen to a point, but I shouldn't have a dead short on case when testing the pins. Red and Grey side, I had multiple pins that ohmed out as a short to housing of tcm. 1.0ohm on up randomly up and down to no less then 1, I think I had a 500ohm there at one point.

BUT with that said, ground is fed to the tcm by plug from the body (hence the big sign on the tcm with the slash through it saying do not ground). The magnesium case or pot metal or what ever the case is made out of, shouldn't show continuity to the housing of the tcm correct? Anytime working on equipment, If I had a short to housing, be it a electric drive motor, testing the legs of the motor and windings, to a vcm (vehicle control monitor) ohming connectors and pins that was the last nail in the coffin to confirm bad ecu or ecm that is was shorted to the housing.

Now if you can take a look at what I wrote, and let me know your thoughts, I am just trying to confirm my findings that the tcm is actually shorted out to itself, I would really appreciate it.
M

Just want to follow up with this conversation, as no one seems to be responding regarding the conversation.... I replaced my TCM with a used junkyard tcm with a warranty that its not DOA

From my trouble shooting I found that my TCM was showing signs of issues, though everyone else I spoke to outside of this chat pointed to other possible issues. Long story short, replaced the tcm, and all the codes except for p0872 and u1096 went away, so I successfully eliminated 24 plus codes ... Though the u1096 is a big code still p0872 is much more managable .. Hopefully I can report 1 more time after a little more investigation with a positive factor .

Just FYI, Mike passed away on Monday morning.
Do as he said and find a good shop to help you.
M

TheBac said:
Just FYI, Mike passed away on Monday morning.
Do as he said and find a good shop to help you.
Click to expand...